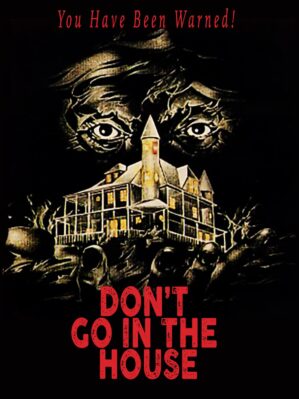 The 1970s is when serial killers became a huge deal in the United States, with active killers through the decade being infamous maniacs like Ted Bundy, John Wayne Gacy, Ed Kemper and David Berkowitz. Pop culture reflects on reality, and with the infatuation, and fear, serial killers were bringing to America, it’s no wonder that the serial killer subgenre of horror gained popularity.

Serial killer films had existed before 1960, but that’s the year when it became its own subgenre, with Psycho (1960) in the US and Peeping Tom (1960) in the UK. With the rise of exploitation in the 1970s, the films started to become more and more intense with movies like Black Christmas (1974),” which influenced director John Carpenter. He would cement the “slasher” aspect of the serial killer genre with his masterpiece Halloween (1978), starting the “Golden Age” of slasher, and horror in general.

At surface level, Don’t Go in the House, could be dismissed as a run of the mill slasher film; one of countless Halloween clones that came out in droves with varying success. That would be wrong a wrong assessment, as the film isn’t a slasher at all, but a good old serial-killer flick. Not a great one, but one nonetheless.

It’s about a guy named Donald Kohler. He follows the tradition of movie murderers, set by Norman Bates in Psycho (1960), but inspired by Ed Gein originally, where he has a love-hate relationship with his mother. Many real life serial killers had abusive and/or overbearing mothers, so it can be called a trope or just reality. Kohler was abused by his mother—she burned him—and now he has an obsession of punishing women with fire, like he was punished as a child.

When Kohler’s mom dies, he pulls an Ed Gein and keeps her body around, but decides to give her company: random women he finds, burns, and props up in his living room.

The film made its way to the “Video Nasties” list in the UK, however, apart from one scene (in which great practical effects are used to burn a person alive), it isn’t really gory or bloody. It’s much more of a psychological thriller, focusing on Kohler’s obsession and the voices in his heads. Dan Grimaldi’s performance is top notch in the role, as are most of the performances in the film.

Don’t Go in the House is a decent entry in the serial killer genre, although it never reaches real originality, Grimaldi’s performance and that one ‘burned alive’ death scene raises it to a semi-memorable status.