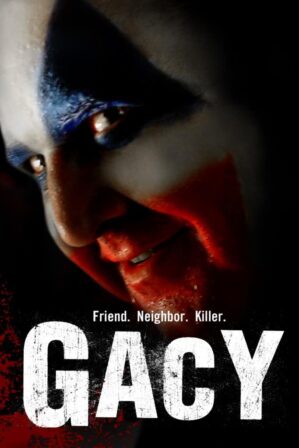 John Wayne Gacy wasn’t just a serial killer. He was also, at one point, the manager of three KFC restaurants. He was an interesting, smarmy, man. Like his partners on the top of the serial killer fame list, Ted Bundy and Jeffrey Dahmer, nobody really suspected Gacy of anything other than being a somebody who acted like a used car salesman most of the time. “The Killer Clown”—he performed for children as Pogo the Clown—raped, tortured, and murdered at least 33 young men.

Over two-dozen of his victims ended underneath Gacy’s house; he buried them in his crawl space. That crawlspace is really what Gacy is about, it’s even an alternative title for the film The Crawl Space). The problem with burying bodies in a shallow grave underneath a house is the bodies rot because of bacteria in the ground and they get infested with the larvae of insects. That’s why we tend to bury humans in a coffin about six feet deep.

Gacy didn’t think that one through so it started to stink up the place and this film documents that. We see neighbors complain, we see the wife complain, we see people reference the smell, we see Gacy ask about what can be done about the smell after he has told everyone multiple times that he will fix it. We see people go down there and if the characters were played by better actors, we would know how a real person would have reacted to the smell. There are also many close-up shots of the insect infestation, however, the budget seems to have only allowed them to have a few worms and cockroaches; in real life, the flies were the main issue, but flies are expensive in Hollywood.

John Wayne Gacy himself is also a good part of the film, but it’s mostly him acting weird toward his workers (he ran a construction firm and hired only prospected victims), awkwardly seducing them, getting beaten or beating others. There is really no introspective on why Gacy is what he is. There is a scene where he is called a “faggot,” and he reacts badly because he hates them queers, everybody knows that. That isn’t really digging, though. Gacy wasn’t a serial killer because he was a homosexual just like Ted Bundy wasn’t a serial killer because he was a heterosexual.

Mark Holton (Pee-wee’s Big Adventure (1985), Leprechaun (1993)) portrays Gacy, and he is quite good. He is no Brian Dennehy, who played the part in To Catch a Killer (1992), but he does an excellent job and is really the only redeeming quality the film has. Most of the other actors are bad, the script itself is superficial and at best boring if it wasn’t for Holton’s performance, and the film itself looks terrible. It’s badly shot, badly lit, not color corrected, and has as many random shots of clown pictures as random handheld shots that are all over the place. Overall, it’s pretty useless.