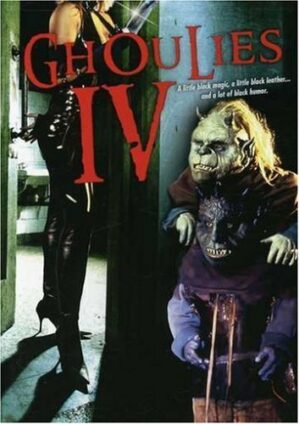 There is a scene in Ghoulies IV where two sewer workers are looking for some sewer related issue. For those unfamiliar with the 1950s show The Honeymooners (1955), one character is plain weird and out of place. It’s a dude dressed like Art Carney’s Ed Norton from that show, doing an impression of him. The other, overweight, worker is called Ralph. Ed was for Ralph what Barney was for Fred in The Flintstones (1960). Those who get the reference will find it plain weird and out of place. The actor who played the Ed Norton character would go on and portray Art Carney in a TV movie eight years later.

I don’t know what that means, but it explains what kind of a film Ghoulies IV is.

Let’s start with the title characters, the ghoulies. Most movie monsters are quite consistent. Sure, Freddy might get more jokey, Chucky might find love, Jason might become an indestructible demonic force, but they are always basically the same thing. The ghoulies, not so much. In Ghoulies (1984) they were mostly background characters with a few close-up shots to show how satanic the plot was. In Ghoulies II (1987), they were front and center and in full on Gremlins (1984) mode. They took a bizarre turn in Ghoulies III (1991), where they gained the ability to speak and became zany wisecracking creatures. Then comes Ghoulies IV, a movie with such a small budget, they couldn’t afford puppets, so the ghoulies are two actors of small stature in bad Halloween costumes (one of which is Tony Cox!).

I actually don’t consider those two beings to be ghoulies. In the first film, the antagonist Jonathan Graves summoned two familiars that were dwarfs. I believe that the two creatures in this film are those beings, not ghoulies. Take that as you will.

The film is about Jonathan Graves, from the first one. He is now a police officer, having left the occult life behind him. He just wants to lay back, enjoy some female company and be cool like you only could be in the 1990s; however, an ex-girlfriend (who is dressed up like Pamela Anderson in Barb Wire (1996)) of his escapes from an insane asylum and summons the evil that took over Jonathan in the first movie. She also summons the not-ghoulies.

Unlike the other three, Ghoulies IV is barely a horror film. It’s a comedic cop movie with supernatural elements. It exudes nineties straight-to-videoness, which can be fine when you are in the mood for that but there are much better ways to spend 80 minutes.