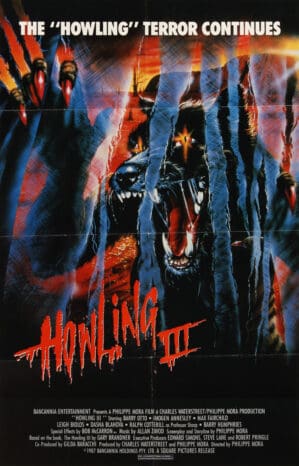 Marsupials are a class of mammals that are mostly found in Australia, but also in the Americas. Most marsupials have a pouch on their stomach where they carry their babies. Kangaroos, koalas, and Tasmanian devils are probably the most well-known marsupials. Wolfs are not marsupials, nor are humans, but that didn’t stop the makers of Howling III (Also known as Howling III: The Marsupials) to make a marsupial werewolf flick. There is some talk about evolution, but also about alien species.

I think the creatures here aren’t actually werewolves, but some kind of marsupial-human hybrids that turn into “were-Tasmanian-wolf” at times. One mutant claims that when the humans hunted the Tasmanian wolf to extinction (that really happened), its spirit went into some humans (that probably didn’t really happen).

Now, I mentioned in my review of Howling II (1985) that it was a weird film. Obviously, Howling III leaves it in the dust when it comes to weirdness, it’s a full on ozploitation films–a genre that was quite popular in the 1970s through the 1980s, and even beyond. There are few genres quite as offbeat and bizarre as ozploitation films and Howling III is no exception.

It’s about a Jerboa, woman who escapes her small hick town of Flow (think Nilbog). She gets a role in a horror film about werewolves (meta) and falls in love, gets pregnant and we see the birth, as well as her small spawn fresh from the birth canal, crawling up her hairy belly into her pouch. She is a marsupial Tasmanian wolf human hybrid.

The film also follows Harry, an anthropologist who has been obsessed about some kind of werecreatures since he found footage from 1905 of aborigines sacrificing a woman with a wolf head. When these beasts become pubic, he works with scientists and the army to decide what there is to do. Some (the army) think destroying them is the best bet. He wants to preserve them. Harry joins Jerboa, who is caring for her latex offspring (I’ve been told that it looks cute), to run from the evil humans who want to kill what they don’t understand (the murderous nightmare beings).

Aside from werewolves (?), there is no connection to the first two Howling films, except it being directed by Philippe Mora, the Australian director of Howling II. It could be argued that the ending scene mirrors the ending of The Howling (1981), however, here, it includes Dame Edna.

It’s quite hard to pinpoint if Howling III is a bad film or a good one. Like the second in the series, it’s mostly just a weird one. Aside from everything else mentioned, we also have a ballerina who transforms into a werewolf mid rehearsal, a pack of nuns who are also werewolves, and a mixture of quite good makeup effects to the cheapest latex Halloween masks you can find. In the end, the only question that matters is: Is it entertaining? And the answer is yes. Yes, it is.