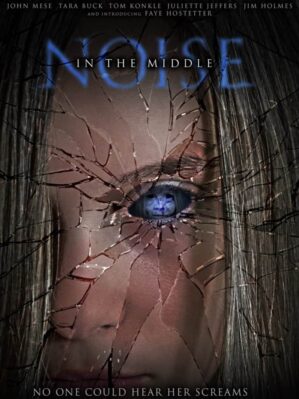 A problem that many first-time movie makers face is a lack of experience in editing the script before the film is shot. It’s an understandable problem. A person has been waiting their whole life to make a feature film, and they have a lot of ideas. They don’t know if they will ever be able to make another film, so consciously, and perhaps subconsciously, they don’t want to let any idea out of the project they are working on.

So instead of the main premise of the movie shining through, we get a muddled story with too many concepts and not enough focus. This is the issue with Noise in the Middle, the directorial debut of Marcus McCollum, who also co-wrote the script with Glen Kannon.

The film is competently made, and I believe both of them can make a better film in the future, but the muddling of the story makes it a lackluster effort.

The main premise is simple: a busy businessman becomes a widower and a single father of a non-verbal autistic girl when his wife dies in a car accident. We already have a film there. Then there is the twist, he moves with his daughter to a new home—it’s haunted. A story about a haunting that is only witnessed in full by a non-verbal autistic child is an interesting concept.

But then we get to the muddling.

The reason he moves places is because the daughter is starting a new experimental treatment for her autism (you can’t ‘cure’ autism, btw). The experiment involves magnetism, or something of that ilk, and makes her, and us, see flashes of uncomfortable material.

This might work. Is the treatment causing her to become clairvoyant? Is this a cautionary tale of messing with the brain? Not quite.

Because of all the ideas, things are muddled. The problem is also that all those ideas are from other films.

It turns out that the haunted home was built on a 19th century poor house led by a wicked man (think the ancient Indian burial ground and Kane in the Poltergeist (1982) series). The wicked man looked quite like the father (just like how George Lutz looked a lot like Ronald DeFeo Jr. in Amitywille Horror (1979)) and as time progresses, he starts to behave erratically (quite like Lutz in Amitywille and Jack in The Shining (1980)), especially when his dead rotting wife starts to control his actions (Event Horizon (1997)).

At this point, the non-verbal autistic angle is just a sidenote, and her story is even more muddled because the “the knowing” trope character is a new-age store owner (who I think is portrayed by the ghost of Dom Deluise) who believes that the girl is, in-fact, an indigo child.

For those who don’t know, indigo children is a new-age bullshit created by a bunch of Karens who wanted their ill-behaved children to be seen as special—the next step in human evolution, not just poorly parented gremlins. When used to describe normal kids, it’s annoying but mostly harmless; when used to describe children with real issues, like autistic children, it’s straight up dangerous. People with disabilities need real help and solutions to make their life better, and ideas that they are ‘superior’ or ‘perfect’ increases the odds that they won’t get the help they need. But I digress.

There are more, but these are the main reason why the film doesn’t work. You don’t need both a house built on something wicked AND an experimental treatment. You don’t need the idea that the autistic child is somehow more connected to the spirit world, if you have both prementioned reasons for the haunting, especially when the autistic character quickly falls into the background. Also, you don’t need a non-verbal autistic character to begin with if it is just a prop that changes its behavior and ticks whenever the protagonist’s character needs it.

Somewhere inside Noise in the Middle there is a decent film, but the endless layers of ideas make it a confusing mess. It’s not an overtly bad horror film, and there are a lot of them released, but it’s not a good one, either.